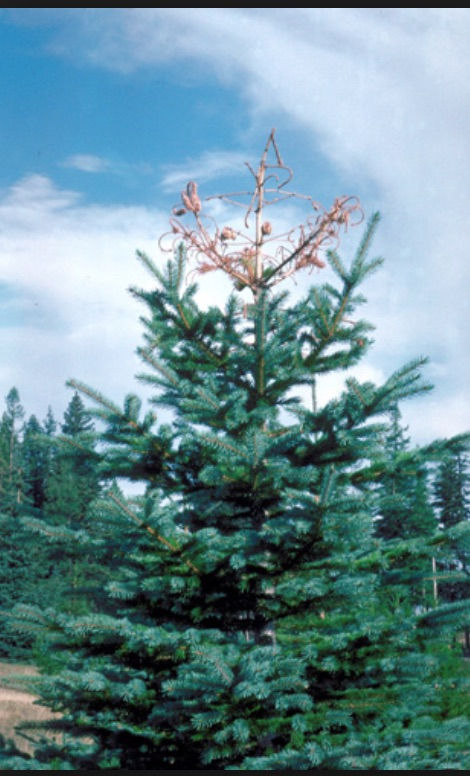 Spruce Trees - White Pine Weevil
White Pine Weevil has been damaging spruce trees within the RM of Edenwold since 2019. The damage is characterised by the top main shoot turning brown, which in turn prevents further new growth. To combat the spread of the weevil, the tree must be pruned of all dead branches as soon as the damage is noticed. Infected branches can be disposed of at the City of Regina Landfill.

Black Knott Fungus is characterized by lumps (galls) that feed on the tree. Initially, the galls may
have a cork-like appearance, and over time, may progress from a spongy green mass to a 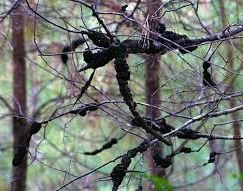 hardened "charcoal-like" mass. If left untreated, the tree will become stressed, distorted, and ultimately die. This fungus is spread by wind and rain but can be controlled by cutting and burning the affected branches once the fungus is detected.

Best results will be achieved if pruning is done in late winter/early spring, before the fungal spores are released in the spring. Infected branches can be disposed of at the City of Regina landfill. For more information from the White City Garden Club, visit White City Garden Club - Resources Page.

Rhizosphaera Needlecast is a fungal disease affecting mainly Colorado spruce, and occasionally other spruce. The disease begins in the lower portion of the tree with infected needles being shed, causing branches to look sparse. Spore dispersal from infected needles occurs during wet weather in the spring, with rain spreading the infection from infected needles to new emerging needles. Under suitable conditions, the disease gradually progresses up the tree, leading to the death of the tree.

Symptoms of Rhizosphaera Needlecast appear in the spring following infection, with infected inner needles turning yellow, then purplish-brown by the end of summer. Most infected needles are shed by the fall, although some may remain attached to spread the infection the following spring.

To reduce the spread of Rhizosphaera Needlecast, avoid pruning or shearing trees during wet weather and sterilize pruning tools frequently by dipping them in 70% alcohol for 3 minutes. Remove any severely infected branches and rake fallen needles from the base of trees. Promote good air circulation and encourage rapid drying of foliage by mowing weeds or other vegetation near trees. Following natural methods, some chemical controls registered for Rhizosphaera Needlecast can also reduce the spread of the fungus. Apply as per the label instructions beginning in the spring when new needles are 1 to 5 centimetres in length, and again several times at 3-4 week intervals until the fungus disappears.

Navigate thru all the sub categories of the website

Fires may start easily and spread quickly but there will be minimal involvement of deeper fuel layers or larger fuels.